Welcome back to another ‘Look Back At 2016! This year has been an amazing year for myself personally, but it has been a fantastic year for Uniko. We have had 5 fabulous releases, with 16 new clear stamps sets lining the Uniko HQ shelves.

I don’t know about you, but to me this year has almost passed by in a blur! With that in mind I thought it would be nice now the main seasonal festivities are over and as 2016 draws to a close, to take a look back at Uniko’s 2016.

Apologies for the delay in posting and not posting yesterday, I had little sleep Wednesday night due to a Josh bean having nightmares, poor little fella. Then on Thursday I had to take Mr Cat to the vet and he had an operation to remove his eye as he had a large tumour in it. Another poor little fella that needed my attention and love post op last night.

Anyway, I am back today, I am taking a look back at the September/October 2016 Release and giving some fresh inky love to Originally Organic, Marvellous Mehndi, Simply Said II, Winter Foliage & Christmas Sparkle clear stamp sets. 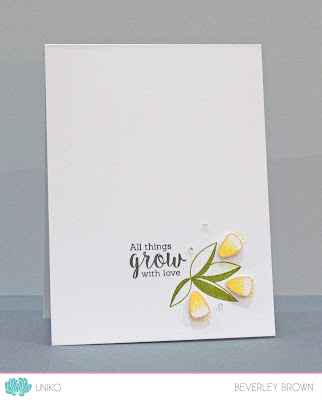 I was inspired by the current challenge over at TIME OUT Challenges HERE, which is an inspired by words challenge.

I thought the sentiment I chose was appropriate and related to the ‘new beginning’ part of the challenge phrase. I then decided to accent the sentiment with the leaf cluster and a trio of sunny yellow buds to represent the ‘sunrise’. 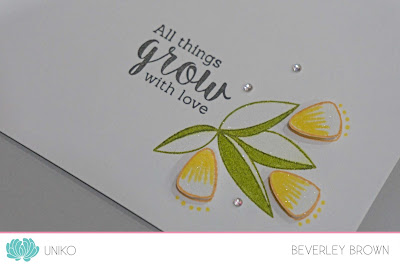 Next I dusted off Marvellous Mehndi… 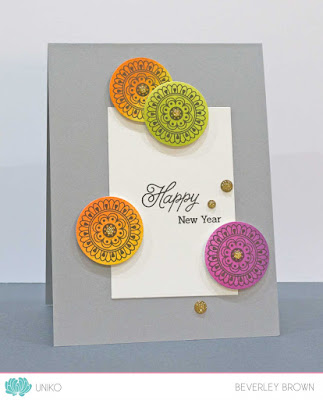 For this card I got my distress inks out and enjoyed some relaxing ink blending! The sentiment is a mix of ‘Happy’ from Simply Said Birthday, which is partially stamped and the ‘New Year’ is from Simply Said II. 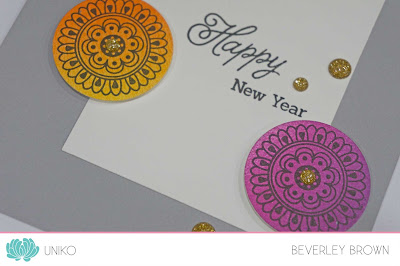 Lastly, I switched gears back to Christmas and combined both Christmas Sparkle & Winter Foliage. Plus I really gave my new MISTI a workout on this card. 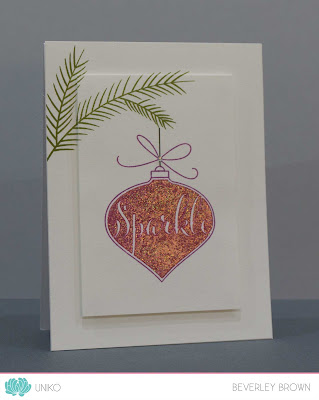 I love this multi card layer stamping and lining up the bauble was SO much easier using the MISTI! I was also able to stamp the bauble in Altenew Cosmic Berry ink and then stamp over it again in VersaMark to be able to heat emboss it with Crystal EP. 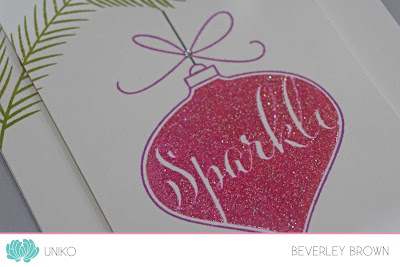 I hope you will join me again tomorrow, when I will be taking a look back at the 2016 November Release and the last of 2016. Until then, thank you for stopping by.

Due to the challenging times we’re all experiencing, Uniko will be suspending website orders until further notice. Thank you.